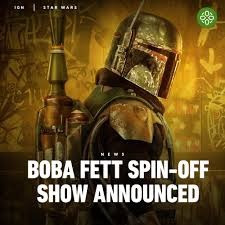 Appearing as a last-minute surprise during Chapter 16, Boba is seen on Tatooine taking over Jabba’s Palace from Bib Fortuna. At his side, Fennec Shand. Expect this to be a premise that is picked up in 12 months’ time. Boba running the rule over the galaxy’s scum and villainy has all the makings of a great series.

There have been rumours of a Boba Fett spin-off for some time. In November, a report suggested that it had already begun filming – though actor Temuera Morrison remained coy about a Boba Fett return in a recent interview.

“I’m just going to have to wait and see,” Morrison told The New York Times when asked if he’d reappear in The Mandalorian or another Star Wars project. “I think a lot of it depends on how things go with this season, but I don’t really know.”

Here’s what else is coming to a galaxy far, far away: this is The Way to our list of upcoming Star Wars movies and shows.

“DIN Next” is the font used in BOBA FETT SPIN – OFF SHOW ANNOUNCED poster. DIN Next was designed by Akira Kobayashi, Sandra Winter and published by Linotype. DIN Next contains 42 styles and family package options.