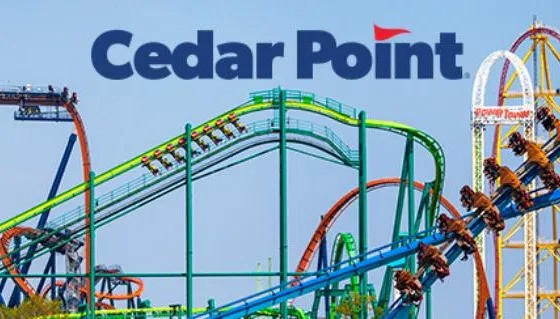 Cedar Point is a 364-acre (147 ha) amusement park located on a Lake Erie peninsula in Sandusky, Ohio. Opened in the late-1800s, it is reported to be the second-oldest operating amusement park in the United States behind Lake Compounce. Cedar Point is owned and operated by Cedar Fair and is considered the flagship of the amusement park chain. Known as “America’s Roller Coast”, the park features a world-record 72 rides, including 17 roller coasters – the second-most in the world behind Six Flags Magic Mountain. Its newest roller coaster, Steel Vengeance, opened to the public on May 5, 2018.

The text on the logo we identify is created by  Gibson Bold Font. Gibson was designed by Patrick Griffin, Rod McDonald, Kevin King and published by Canada Type. Gibson contains 8 styles and family package options.