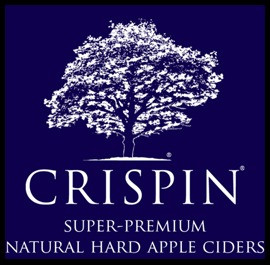 Crispin Cider is a hard apple cider company based at and produced in Colfax, California. Imported ciders are produced in Tiverton, Devon, England.

Crispin was formerly located in Minneapolis. The company acquired Fox Barrel Cider in 2010. The purchase included its cidery in Colfax where the company is now headquartered. In early 2011, Crispin began importing a dry English cider, Browns Lane (named after the original Jaguar factory in Coventry), from England. In 2012, Crispin was acquired by MillerCoors. The founders of Crispin went on to open Copper & Kings American Brandy in 2014.

The text on the logo we identify is created by Trajan Pro Font. Trajan Pro was designed by Carol Twombly and published by Adobe. Trajan Pro contains 2 styles and family package options.