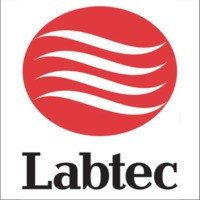 Labtec Inc. was a manufacturer of computer accessories, founded in Vancouver, Washington, United States in 1982. They were best known for their budget range of peripherals such as keyboards, mice, microphones, speakers and webcams.

The text “Labtec ” on the logo we identify is created by Candida Std Bold Font. Candida was designed by Jakob Erbar, Walter Höhnisch and published by Bitstream. Candida contains 3 styles and family package options.